A couple months ago, J's sister, Jody, and her husband, Jai, approached us about going to Las Vegas the last weekend in July. Their wedding anniversary was that weekend. Jai's brother and his wife (Tim & Trish) also were celebrating an anniversary that weekend, and were going to be there as well. It sounded like a LOT of fun, so we signed on.

Jai and Jody used their time share condo time, and we paid them a small bit of money for our share of our lovely two bedroom, two bathroom condo with a full kitchen. It was ON Las Vegas Blvd, but a good 4-5 miles south of where all the hottest action is. I considered that to be a good thing though- it was calm and quiet.

We had an absolute blast! Friday night, we saw "Hangover". It is a hysterically funny movie about Vegas. Saturday, we hooked up with Tim & Trish. They flew in that day and were staying at a different hotel. We ended up going to a show called "Ignite". There were pretty dancing girls, awesome goth music that brought back memories of high school, some cool illusions, and best of all, FIRE!!!! I love fire. We had a blast at the show. Antonio met us before the show, and then stopped to talk to us afterwards. He was a very nice guy, and very good looking. I thought he looked better without the contacts, but ya gotta admit that the contacts give stage presence, eh? (this is a singularly unflattering picture of me, but oh well!) This is Tim & Trish, outside of their hotel. 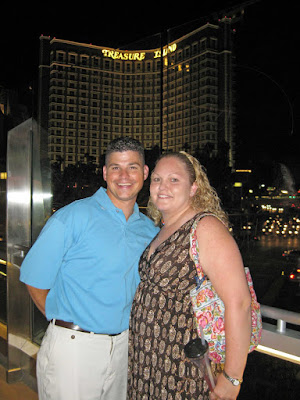 This is Jai and Jody with Spongebob, at the Excalibur Hotel. 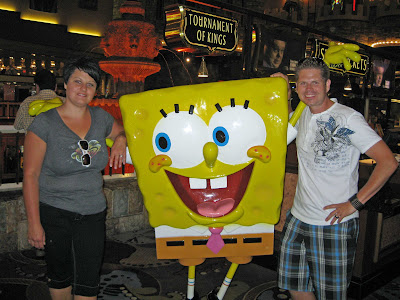 Jim and I in front of Treasure Island. 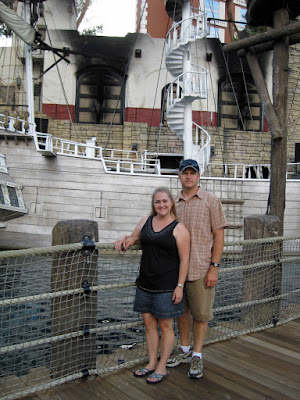 We did a TON of walking. According to the pedometer on my cell phone, we walked 7 miles on Saturday, 11 miles Sunday, 7.7 miles Monday, and 4.3 miles Tuesday.

I felt so lucky to go on a vacation with such a fun group of people. Jai and Jody and Tim & Trish are such fun, entertaining people. We shared a lot of laughs. We have quite a few fun inside jokes that I will laugh about for the rest of my life. I hope we can do it again.
at 8:52 PM

I need copies of the pics when you get a chance. We had soooo much fun. I'm glad you guys could come.