The last few years, J and I have chosen to have a little trip to celebrate our anniversary instead of buying each other gifts.  Last autumn, we had friends who suggest a group backpacking trip to King's Peak, the highest peak in Utah, located at 13,527' (4,123 m) above sea level. J IMMEDIATELY jumped on board. He began haunting Recreation Outlet and bought us all kinds of fun backpacking toys. We each got new backpacks, sleeping bags (that zip together!), sleeping pads, pillows, tent, backpacking stoves, water purification kits, etc. etc. The tent was purchased in January, and he had to set it up in the basement.

I didn't have his level of enthusiasm, but I was impressed with our neat gear. My sleeping bag compacts very small, but is good to 20 degrees. Because J bought the same brand, but the "man" version, it goes to 30 degrees and they zip together.

Starting in May, we started doing a lot of hiking, with going up Adams Canyon being our favorite hike. In July, we started going up the canyon with our backpacks and gear.


By August, we felt ready. I had some last minute work emergencies, and I was really apprehensive to go off the grid for several days, but I finally took a deep breath and left cell service. Because we left so late due to my work, we decided to camp the first night at the Henry's Fork Trailhead. It was nearly dark by the time we got our camp set up. It was easily set up though, and dinner was quick, easy and delicious. 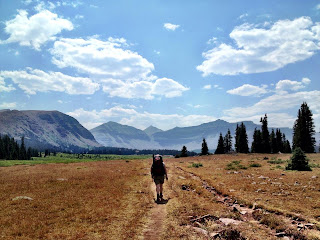 The next morning, we were off on the trail. It was about 9.5 miles from the trailhead to where we set up camp for the night. It was not a very steep hike, and the views were spectacular. I had a 30 lb pack, and J's weighed 40 lbs. When we got to camp, we were pleasantly tired.


We set up camp for the second night, and I even got my bear burrito (i.e. hammock) set up.

We bought a gravity water filtration system called a platypus. I was thrilled with how quickly and easily it worked. We watched a lot of people pumping their water through the filters, and it looked like a lot more work than our gravity fed system. We didn't get sick either, so that was nice.  We hung out at a nearby waterfall to relax and get water for the evening.


The high uintas as supposed to be bear country. We've been camping there for years and years, but have never seen evidence of bears, even when we were camping along the Bear River.  However, we've always taken precautions and had a bear safe camp.  This time, it was a little tougher to create a safe camp since we didn't have a vehicle or trailer to lock our scented items into.  We used parachute twine and hung our smelly stuff a couple hundred feet from camp between two trees. It took a bit of effort, but we felt like we had done well, even though we didn't think it was necessary.

That night, we were pretty tired, so we settled in to sleep as soon as it was dark.  A couple hours later, we were both startled awake by a loud ROAR, followed by a weird "chuffing" type sound. The horses and dogs at a nearby camp went crazy after hearing that. A little while later, it repeats.  It didn't exactly sound like a bear, but it was a very scary noise. It happened several times throughout the night. Needless to say, we didn't get much sleep at all.  In hindsight, I think it was actually a very strange sounding donkey. If you watch THIS video, and skip to about 40 seconds in, that's the sound we heard, but without the "heeeeeee" intake of breath. So we heard the roar, and the chuffing you hear as well. FREAKY.

When it got light outside, we gave up on sleeping and got up and ate breakfast. We loaded up J's hydration pack with food, water and raingear (it IS the high uintas, and rain/snow can happen at any time) and set off.


Gunsight pass is the main way up the first canyon. It looked intimidating, but ended up being not a bad incline.  The Toilet Bowl is the biggest shortcut up and down, but it's more than 1,000 feet of loose rock and very steep incline. Starting a rockslide is almost inevitable. We agreed that there was NO WAY we were going up the Toilet Bowl. We also thought anyone going down was out of their minds.

We got to the top of gunsight pass, and it started to rain.  Awesome.  We got on our raingear.  We thought about taking a shortcut that's supposed to take about 4 miles off the hike, but because of the rain, and the fact that the shortcut involved scrambling around boulders, we decided to take the long way. Lucky for us, it stopped raining on us soon after, though there was thunder and rain all around us.


By this time, we were about 11,000 feet and climbing, and we were noticing the elevation. I seemed more sensitive than J, and was battling shortness of breath and nausea for most of the hike. I also don't do well without a solid 8 hours' sleep, so I was tired and cranky as well.  We got to the base of King's Peak, and this was our view.

It ended up being all bouldering and fairly steep for the last 1000 yards.  It was about this point in the hike that I discovered I'm really not crazy about heights, or bouldering when it's steep.  J helpfully pointed out that the rocks would kill me far before the heights would.  Thanks honey. 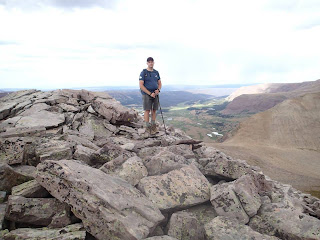 This isn't exactly at the summit, but I liked the photo opportunity here. As you can see, the clouds weren't looking very good, so we decided we needed to really hustle to get down so we weren't caught in the downpour.

We got down from the final summit area, and got looking at the toilet bowl shortcut. It looked awful and scary. However, it looked like it would also take hours off our hike time.  We took a deep breath and decided to take the shortcut.


It was indeed a much quicker way down. I'm pleased to say that neither of us fell, nor started a rock slide, and we went down at the intended pace.  It still was very difficult going, and about 3/4 of the way down, I decided I'd rather do the Arctic Enema from the Tough Mudder a couple times over rather than do this again. To date, I'd say the Toilet Bowl was one of the most deeply unpleasant things I have ever done.

By the time we got back to camp, it was nearly 5pm, and J and I had decided we'd had enough fun with camping. We weren't 100% sure that the roaring was a donkey, and we didn't want to sleep in the same spot, just in case we were wrong, and there were bears. Even if it WAS a donkey, it was loud enough that we knew we wouldn't get a good night's sleep. We figured we had two options: 1- pack up our stuff, hike a few miles towards trailhead and set up camp again, sleep, and break everything down in the morning or 2- pack everything up and make the 9.5 mile trek back to our car, even though we'd already hiked 11 miles plus that day.  Strangely enough, option 2 sounded less exhausting, because that meant we'd sleep in our own beds that night.

We've come to refer to that hike out to our car as the "death march". We were both utterly spent by the time we got back to the car. I pushed myself far beyond any physical limits I thought I had on that hike. The last 45 minutes or so, we had to hike with our flashlights. We saw a lot of animals in that last bit. By the end, I didn't care if I saw a bear. There was no way I was running. I hated my shoes, my backpack, my hair, my skin, my feet, my pants, the trail, trees, mountains, and hiking. I hated rocks most of all. Considering how much I love rocks, this is saying something.

We finally got to the car, and made the two hour drive home. We didn't get home until after 1:30am. I HAD to take a shower that night- I felt like I was growing sweat crystals on my face. I've never loved a shower so much.  We collapsed in bed and slept like the dead in our silent house.

With a good's night rest and a full belly, we felt much better about the trip, and have great memories of it. We did have a friend suggest we make King's Peak a day trip and go again in September. I'm not quite to THAT in my fond memories. I politely declined.

It's now been two weeks. The blisters have pretty much healed, but my feet still hurt a little. I'm ready to go back packing again soon.

Love these beautiful landscape photography. Thank you for sharing it with us.
valet parking luton