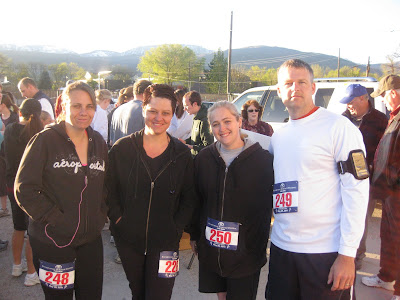 Every Memorial Day Weekend, we always head to Ephraim to attend their Scandanavian Days Festival, and have a family reunion. This year, the family reunion kind of fizzled because my uncle is in poor health, and my grandma (justifiably so) felt that he shouldn't be so far from a major medical facility. With the two of them staying home, we kind of agreed not to do a formal reunion, though we did make Grenco, a traditional soup we always make (I'll post the recipe later).

Since joining a gym, I've toyed with the idea of running in the annual 5k they hold at the festival. I've always chosen not to, partly because I'm chicken, and partly because it starts quite early in the morning. This year, however, I decided to approach J and my sisters and brothers in law, all of whom attend the family reunion. Yes, they're not related to the Larsen family, but they're all super fun people, so the Larsen side adopted them. J's parents also attend every year, and everyone is welcomed with open arms. So, I mention to them that there's a 5k/10k/half marathon that morning, and it had exactly the reaction I was hoping for/was afraid of.

Yes! Let's do it!!! So, J and I signed up. SIL N and SIL E say they'll do it. E, being a runner, plans to do the 10k. SIL J also is on board. The week before the 5k, BIL E ran the Ogden Marathon. He got a good time, but tweaked his knee, and decided he couldn't do another race so quickly. Definitely understandable.

The morning of the race dawns. I was a little nervous. I am not a fast runner, and I still hate running with a white hot passion. I don't want to be the last one in. I don't expect I will be, as the 5k is a "fun run/walk" and there's people with strollers and children. I don't have any illusions of beating SIL J, SIL N, or J. J and his sister (and his brothers, too, I imagine) are superhuman freaks when it comes to cardio stuff. I truly believe they could all wake up tomorrow morning and run a marathon with no training, just for giggles. SIL N had fairly major surgery a few months ago, and was just getting back into her routine. I wasn't sure how competitive of a runner she was, but she didn't seem to have my level of passionate hatred for running, so I figured she was also a lot faster than me.

The race began, and J and SIL J and SIL N all take off. BIL E was there to take pictures and cheer us on. Immediately, they all leave me behind.

Within a minute or two, I'm huffing and puffing. Is it the cold air (we could see our breath)? Is it the higher elevation (5500 feet)? Am I a wimp? Or could it be that maybe, just MAYBE, I should've tried running outside, instead of on a treadmill? I've run outside before. I think. Years and years and years ago. All those articles about how different treadmills are from outside running come flooding back. I feel stupid and slow.

After about 5 minutes, SIL N comes up alongside me. I guess she hadn't passed me after all. We ended up being about neck in the the whole race. We'd run for a bit, and then one of us would drop off and walk for a bit. But, for the vast majority of the race, we were together. It was nice, and I figured we'd most likely finish at the same time.

BIL E kept popping up to cheer on N, and take her picture. Seriously, the guy easily ran the 5k with all of his appearances. He was a great cheerleader, even running alongside her to keep her spirits up.

We finally get pretty close to the end. SIL N suddenly steps up the pace to a sprint. I was a little surprised because we were still a good way from the finish line. The competitive spirit that I thought I was utterly lacking when it came to running reared up. No way was I going to let her get a better time if we'd spent that much of the race running together! So, I sped up too. She sped up more. So did I. I think I was not as close to the end of my rope as she was, as I got a sudden burst of energy, and I actually was smiling.

We passed by some cones, and I guess she thought they were the finish line, so she completely dropped back, and I ended up finishing ahead of her. My competitive streak was pleased. Hey. I never claimed to be a particularly nice person.

When I ran the 5k on the treadmills, I was generally finishing it around 36-38 minutes. When I decided to do the 5k, I was hoping to finish in under 40 minutes. Considering all of the time I spent walking on this race, I figured I'd be over that for sure.

I was ecstatic to have beaten my personal goal by such a huge margin.

I still hate running though. I have yet to experience this "Runner's High". I'll probably keep it up, at least through this summer, and if the Runner's High continues to be elusive, I'll give up running come fall.
at 9:46 PM