My Affair with Donny Osmond

My mom begged my to blog about this, since it was such a funny story. Since it will also totally embarrass my 11 year old, which really is my ultimate goal in life (just ask her!), I think I will oblige.

Back in 2002, I volunteered with the Salt Lake Winter Olympics. I got to do opening ceremonies for the Paralympics Games. 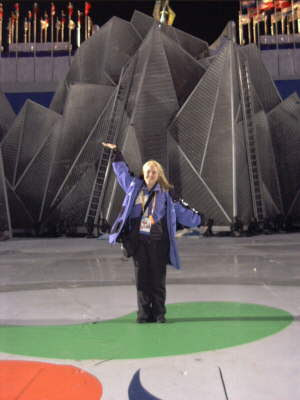 It truly was one of the highlights of my life. To work on that caliber of a production, with the amazing people I met was incredible. 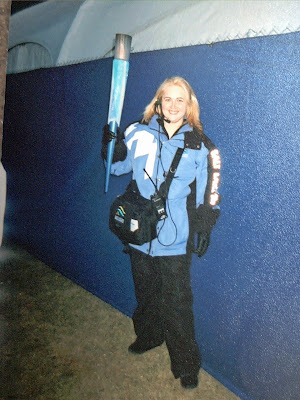 One of my primary responsibilities was to make sure the "talent headliners" were happy, comfortable, and to their spots and cued at the proper time. Donny Osmond did a number in the opening ceremonies. He was absolutely a blast to work with- very down to earth, polite, and nice. I figured he would be as much, his reputation has said as much. Plus, I casually knew his older brother, Tom. Tom was my mailman when I was going to Snow College, and Tom was a great guy. He'd come to our house after he finished his route and would visit with us. Really nice guy.

The night of the performance, I brought my camera, and took a lot of pictures. I asked someone to take a photo of Donny Osmond and I.

I got the photos developed, then scanned into my computer, and kind of forgot about them. We had our screen saver on our computer set up to just show the photos that we had on our hard drive, and the kids loved to watch the slide show of pictures.

A couple years later, J comes to me, laughing. Apparently, K had been watching the slideshow of photos and saw the picture of Donny and I. She was deeply concerned about this, and came to J. She told him that she was really worried because her mommy had a "secret boyfriend". J asked her how she knew this, and she replied that she'd seen a picture of me with another man, and HIS ARM WAS AROUND HER MOMMY! J had her show him the picture in question. I have to give him credit. He managed to keep a straight face, and gently explained that Donny was just a friend, and that he had a wife, and that she shouldn't have to worry about that sort of thing. I laughed til I cried when I heard about it.

So, here is the infamous picture. I have to admit I HATE this picture of me. I really wasn't as fat as I looked- I have always had a double chin, and this is just a really unfortunate angle. Just look at the picture of me with the torch. Not nearly as bad, isn't it? Figures I'd get a super bad picture of myself when I'm being photographed with a celebrity doesn't it? 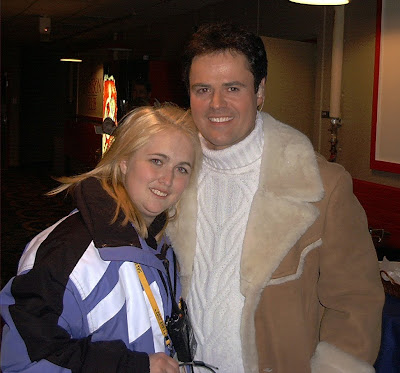 I got to meet him when I was 11 and have had a huge crush on him ever since! I'll have to tell you the story one day, that is so cute that she was that concerned.

I gave you a blog award today!