On Friday night, we took a family hike to Waterfall Canyon. It is about 3 miles round trip, which isn't bad at all. However, the elevation changes over 1500 feet over the 1.5 miles each way. That means it's quite a steep hike. The even tougher part for me was that it was over 100 degrees when we started out. J carried S in a backpack, and I carried Z. 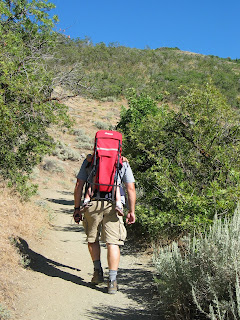 The big kids were excited to go on the hike too. 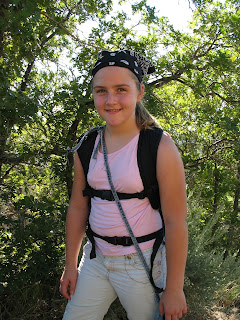 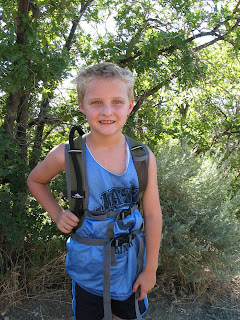 After a half mile or so, S decided she wanted to walk, and not ride. Actually, she decided that from the very beginning, but that's when we gave in and let her walk. She was so tough, and ended up climbing almost the rest of the way up. The last 50 yards or so were quite treacherous- steep and over large rocks, so I carried her that last bit. She was so proud of herself. The other climbers we encountered on the trail were really impressed that our kids were able to do the hike. We found wild raspberries along the way on the way up. 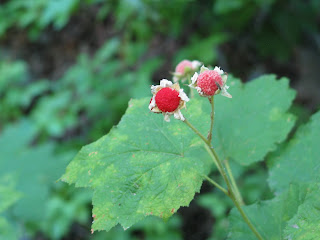 Going back down was much more pleasant, and the temperature had dropped quite a bit (well, to the high 80s). Poor K ended up getting attacked by bees and ended up getting stung 3 times on the leg. She was really tough though, and managed to get down the trail.

I am making it a family goal to go on a similar hike at least once a week. I think it would be really good for us. 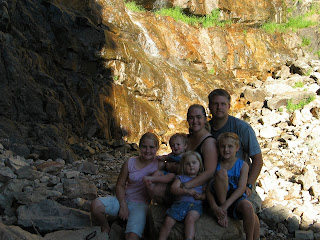 I LOVE the family picture. What a perfecting ending to that post. Glad everyone had a good time and I hope K's leg gets better from the bee stings! And GO S for doing it all by herself most of the way!

Great idea, I love that you have that so near your house!! And I don't think I knew you had a blog!!

It looks like such a good time! I love your family picture at the end, families should do more of these things together these days.

Wow, that is really cool! My family used to hike a lot when I was a kid, and I'd love to do it with my kids, too.