Do you remember the scene from "A Christmas Story" when Flick sticks his tongue to the flagpole and gets stuck?  It was always one of the funniest, yet most awful scenes of the movie.

Today when I picked up the kids from school, S got in the car first. I asked how her day was, and she said emphatically, "It was TERRIBLE!!" 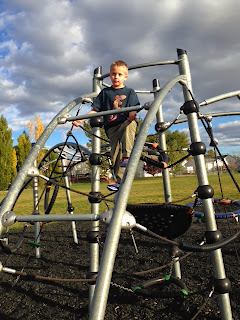 I was really surprised because she generally loves school and always has great days. I asked her why, and she said that Z got stuck on the playground today. What?!

Evidently, they have their last recess at the same time. Z was climbing around on the playground equipment and got his ring finger stuck in a hole on a metal bar. Said metal bar was about 5.5 feet off the ground, and his finger went all the way through (there were holes on either side), but then it wouldn't come out. He was trapped there, standing on a rope with his finger firmly stuck.  A classmate got a recess duty who came right over.  Recess duty couldn't do anything.  The second recess duty came over. She was equally flummoxed.

About this time, the predicament started to get a lot of attention, including S. S is a sensitive type, and was really, really upset. She was on the ground crying over Z being stuck.  About that moment, the bell rang. 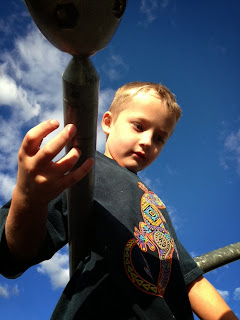 The kids scattered and went to class, leaving the two aids with Z.

Z's classmates went inside and told her teachers. Because she couldn't leave the class alone, she brought the whole class out there to the playground, so she could check out the situation.

Finally, someone brought out some lotion or soap out and got him all slipped up, and he was finally able to slip his finger free.  Ms V (Z's teacher) knew that S was really upset, so she had him go see her in class so S would know he was free and ok. I thought that was very thoughtful of Ms. V.

Z was pretty stoic and casual about it, and seemed much less traumatized than S. All's well that ends well, though I hope that they do something to fill that hole. I'm a little surprised it's never been a problem before, and while Z was none the worse for wear, the potential for significant injury is big, I think.

Once J got home from work, we took Z back to school so that he could show us exactly how he could get stuck on the playground. I thought they were fairly fail-safe.  Shows how brilliant (?) my kids are.


Z has been pretty casual about the whole thing, though this evening, he admitted that he was afraid that he was going to be stuck there forever.