I know I'm a little late getting this posted, but better late than never, right? My kids leave to school at three different times, so getting a photo of all four of them at the same time was an impossibility. 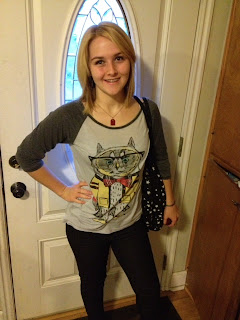 This year, I have kids at three different schools, so one more than last year. Last year I only had two schools to deal with, but Z was in kindergarten. Personally, I believe that kindergarten is the biggest trick perpetuated by parents. Everyone THINKS that kindergarten means there will be a lot more freedom to the parent in charge of getting kids to/from school. LIES!!!!!!  It actually ties you down more because you have to make sure that you're around to get them to and from school. Want to drive off to something 45 minutes away? Not possible. 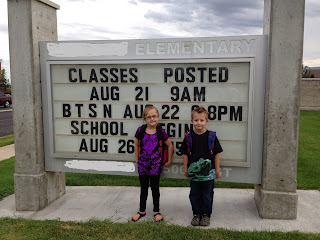 This year, however, heralds unprecedented freedom for me. Two exciting things changed this year. First, and most exciting, is that Z is now in first grade. That means that once I get S & Z to school, I am free (sort of) to my own devices until 3:25 pm.  Second: K is now in high school (eeeeeek!!!!), and conveniently enough, the IB high school just happens to be our neighborhood school. Even better, we are far enough away that she qualifies for the bus! This means that transportation isn't my responsibility this year. No Jazz Band rehearsals. No carpools for her.

Speaking of carpools, my junior high carpool for M has FIVE parents in it this year, so no more rotating Fridays to keep track of. I make two carpool trips a week, and that's it.

So far this year, the only challenging thing has been whether or not I can access my car and/or the road when taking the little kids to school. Road construction is still ongoing, and more often than not, the road is closed, which means a couple mile detour to the school that is 5 blocks away. Even more exciting, now that curb and gutter is done, I've found my car blocked in the driveway by misc. street workers. I've had to make it my policy to take the kids to school 15-20 minutes early to school. That way, if I come out and the cement truck is pouring cement and blocking my car in (like it did yesterday), it's no big deal to just walk the kids to school.
at 11:18 AM