I have to admit that I am quite the slacker cow mom. The cow guy has made it very, very easy. He loaded all of the hay he bought into the loft of the barn, bought an enormous tank (like small pool sized) for water, a big heater for it, and a big trough at the edge of the barn. He's got a pretty nice system to feed/water the cows. Because they're a herd, it's impossible to just feed his, or just feed mine. So, he's been feeding/watering all of the cows. He's said that when he runs out of hay, we'll move our hay over to the loft and go from there. We've got it covered pretty good with a tarp, so hopefully it'll be safe from the elements.

Anyway, yesterday, he called and said he was going out of town for the weekend, and would I be willing to feed/water the cows? Sure!  I've been feeling guilty that he's been going there twice a day and doing all the work. I definitely don't feel like he's getting the fair end here- doing all of the work. So, I jumped at the chance to feed them. 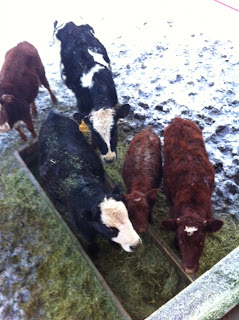 The cows were pretty excited to see me arrive to feed them. Bali, the bali steer was standing lengthwise in the trough, which made getting hay into it rather tricky. You can see Casanova on the far right, which Tbone right next to him. Tbone is still a pretty little guy, but he is getting bigger. He looks tiny compared to everyone else because he's several weeks younger. 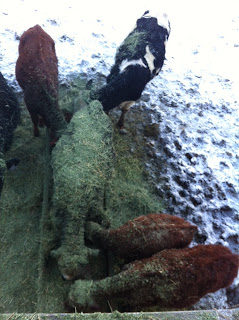 I started to toss the alfalfa down, and hoped that Bali would get out of the way. Nope. None of the cows were terrible interested in moving, so by the end, Bali looked like a green monster.
at 7:26 PM

haha You have your very own cow-sized Chia Pet!!!