Normally, we try to go to both J's family and my family for Thanksgiving. We don't necessarily eat at both houses. But, each year, one side has priority, and we just try to fit the other side in. We've always been able to get it to work out until this year.

This year, both feasts were set to begin at the exact same time, and my inlaws had "custody". My food assignment was all of the pies and the rolls. So, I didn't want to bake all of those pies and then not be around to eat them.  We made the difficult decision to not see my family for Thanksgiving this year, which was really sad. However, I really like my inlaws a lot, and enjoy their company, so it was a very fun day, which was exactly what I expected. My mother in law got out her (actual SILVER SILVER) silverware, which was awesome for me. I now desperately want actual silver silverware. Guess I better get working on being fabulously wealthy, since my SIL and I had a quick battle over who got the silverware when MIL dies (yeah, I'm super polite), and I admitted that the daughter definitely gets precedence.  Oh well. 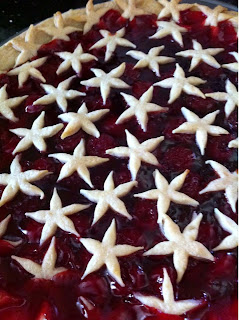 Pies this year included homemade pumpkin (including pumpking that I had baked and pureed), cherry, apple, and razzleberry. The girls helped cut out the stars for the cherry pie. 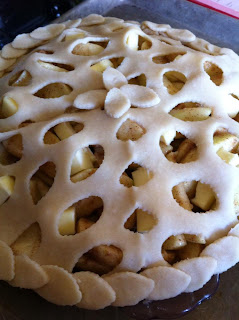 Then, I did an old fashioned apple pie (J's favorite). 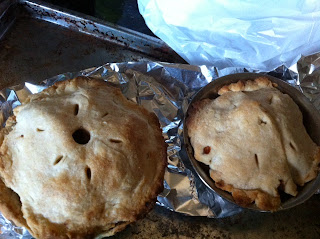 The kids were really wanting to help, so I made a bit of extra filling, and let S & Z make their own "mini" apple pies. 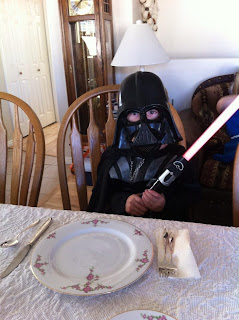 The kids were nearly out of their minds with excitement, and Z was trying to decide what to wear. I told him that it's a nice idea to try and dress up a little for Thanksgiving. He thinks for a moment, and then declares that he'll wear his Darth Vader costume, because it's his best outfit, in his opinion. I managed to keep a straight face. Sort of. 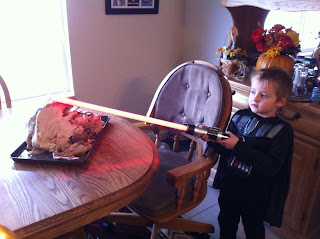 After dinner was over, we had a little fun with Z's outfit and his light saber, and had him pose like he was going to carve the turkey. He is such a fun kid to have around.


I have to admit that although I was sad not to see my family, it was nice to not be rushing from place to place, stressing over whether we spent enough time with each side of the family.
at 10:13 PM