Today, one of my imaginary friends (i.e. message board friends) posted a thread about how she was able to make a broom stand upright, and said it was because today is the autumnal equinox. People mostly laughed about it, but then some of us decided to give it a shot. I have two brooms- One full size, and one a little smaller that I keep in the trailer. Here is the results. 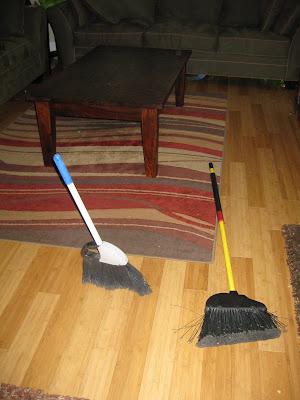 Later in the day, I was able to get the larger broom stand on end, but didn't take a photo. I went to my friend Jackie's house, and amazed her and her kids by performing the same trick with their broom. I was just as amazed as it was one of those slant ended brooms.

Then, people said that one could balance an egg on it's end today too. Well, I accidentally cracked the first egg I was experimenting with, but look at the second one: 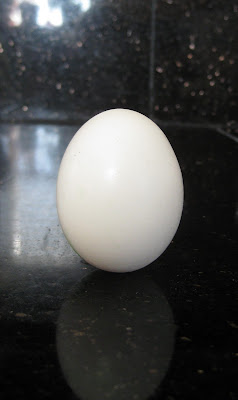 Just think. I could have really gotten the house clean today with all of the time I wasted trying to balance things on end.
at 7:30 PM